Framework of Colonization in Canada 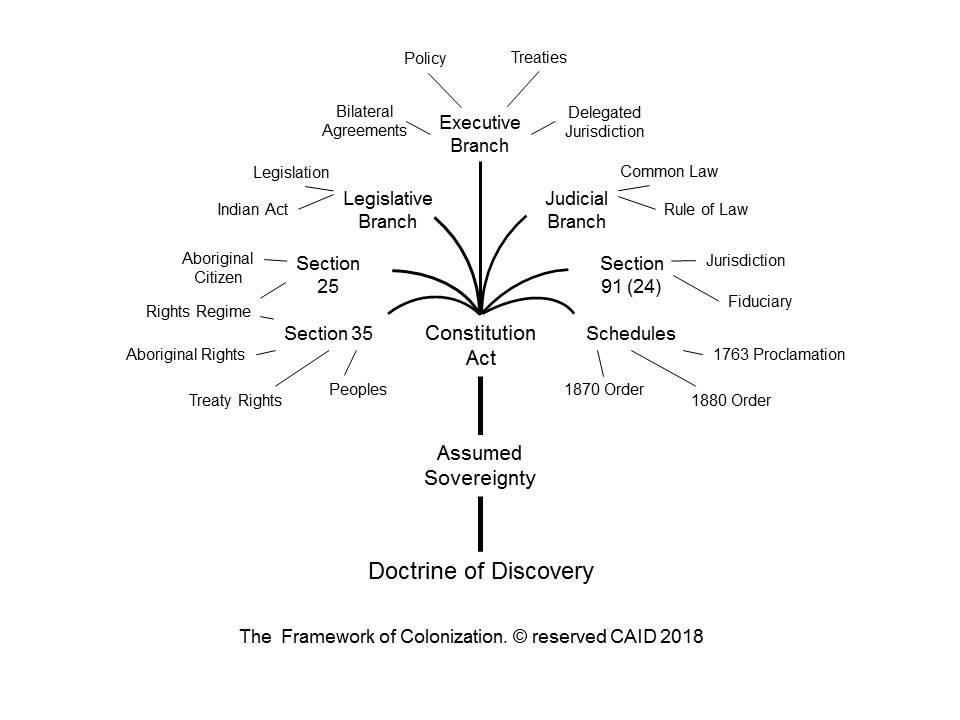 We live in a country that was colonized at the expense of Indigenous Peoples using policies that implemented exploitation, assimilation, and genocide. The goal was to exploit the land and its natural resources for profit. Governments in Canada have apologized but nothing has changed. Elected officials and career bureaucrats are too close to the problem to see all of colonization, they can only see policy.

Someone created a system in Canada for colonization to occur, it did not suddenly appear in the blinding flash of a colonial big bang. Other individuals or groups continued tweaking and adding to the system’s colonizing framework, as needed, to continue the exploitation. It is this Framework of Colonization that needs to be seen and dismantled. Government cannot dismantle one or two aspects of the framework to end the oppression of Indigenous Peoples, they need to pull it out from its root and get the whole thing.

The root of the framework is the Doctrine of Discovery. Colonization started with the doctrine removing Indigenous sovereignty over lands and resources. The Crown then assumed sovereignty over Indigenous lands, resources, and peoples. In 1867, the Crown vested its rights into government and other delegated jurisdictions through the British North America Act (constitution). Rights were divided between federal and provincial governments with control over Indigenous lands, resources, and peoples falling to the federal government. Legislation was enacted and policies developed to take up lands and resources while assimilating Indigenous Peoples. The rule of law protected, and still protects, Crown rights.

Colonization underwent a facelift of sorts with the repatriation of the Constitution Act and inclusion of sections 25 and 35 in 1982. Legislation and policy, protected by the rule of law, further developed after 1982 into what is in place today. It is this constitutional, legal, legislative, and bureaucratic framework that empowers assumed sovereignty over Indigenous lands, resources, and peoples that is referred to as the Framework of Colonization.

The framework promotes and protects Crown rights and its delegated jurisdiction over land, resources and people through the rule of law while at the same time excluding sovereign Indigenous rights to land, resources and people. The Framework of Colonization uses this flow and ebb of protection and exclusion to create the means to advance colonization. No matter what elected or bureaucratic officials do in an attempt to rectify the wrongs of colonization and assimilation, if the framework is not removed, nothing will change. Left in place, the Framework of Colonization will orchestrate the final destruction of Indigenous sovereignty, rights, jurisdiction, and Peoples.

The rest of this section of the website will provide a basic overview of the framework of colonization.